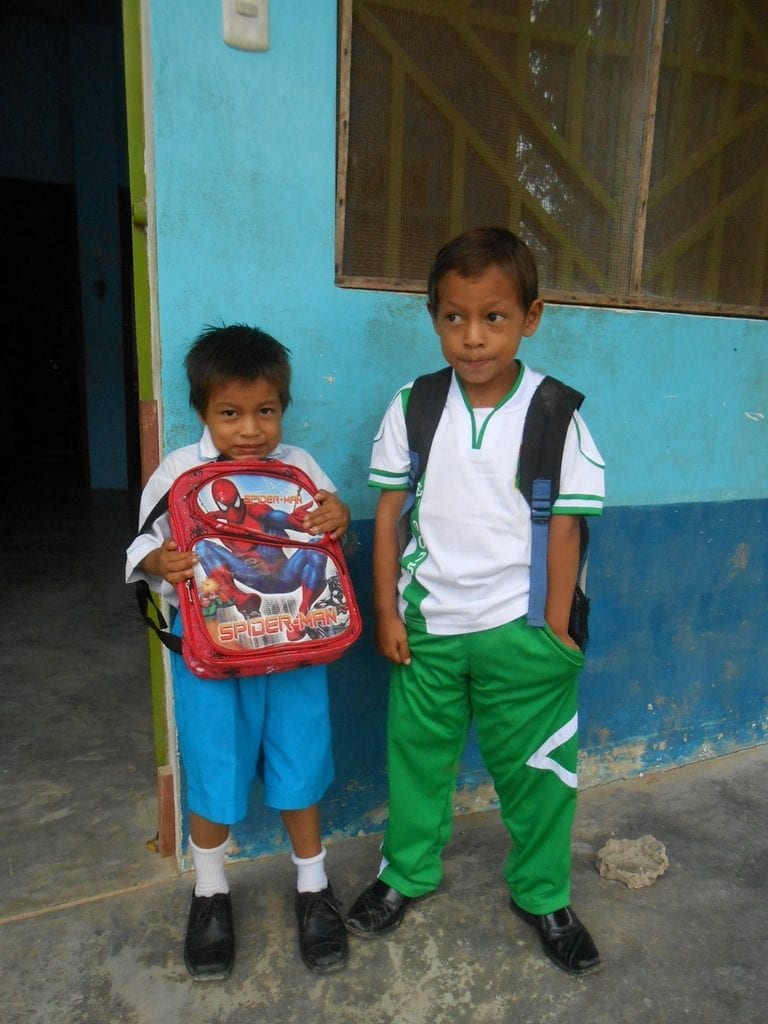 As a homeschooling mom, I’ve lost countless nights of sleep contemplating how best to educate my kids. Should we participate in the new program at the museum or is our time better spent at the nature center? Should we be doing history together as a family or does a more segregated approach better meet the kids’ needs? There is no end to the questions that have occupied my mind – especially since entering missions. Given this perspective, it is almost unfathomable to me that someone else doesn’t even care if her kids know how to spell their names.

We arrived here in Peru in January 2016. Since the school year begins in March and ends in December, all the kids were out of school. The abundance of visitors was overwhelming and I had to accept (with a little bit of difficulty) that zero school work would get accomplished until the local kids returned to their classes in March.

March arrived and everyone headed off to school – everyone except the two neighbor boys: Jose and his little brother Fernando. Every single day they sat at our doorway and watched us do school work. When we inquired about their absence from school, they’d just giggle and run away.

After a bit of time we had the opportunity to talk with their parents, but it was odd… we couldn’t get straight answers from them either.

Our questions seemed so easy: “How old are your kids?” “Have they ever gone to school?”

Although we felt sorry for these kids, our desire to help them was skewed by the irritation that welled within us when they came around. Jose and Fernando stole from us every chance they got. They constantly climbed all over our van, played inside and left the lights on, which drained our battery. They would tell us that they were hungry and then throw the food we gave them on the ground. When we kept our door open, they would chuck rocks and garbage into our front room. If the door was closed they would bang on it with whatever they could find. It’s no wonder, I thought, that everyone in the neighborhood dislikes these kids. Most of the time it even seemed like their parents struggled to love them. Their mom constantly yells and their dad drags them around by their ears.

One day, after I yelled at them to leave us alone, I went to prayer in tears. I had come to Peru to love like Jesus, but I felt like nothing more than a hypocritical poser.

I promised myself to do better, which required lots and lots of prayer. When the neighborhood kids were teasing Jose and Fernando, we began stepping in. When they came to our home scuffed up and bleeding from a confrontation, we searched for the culprit and spoke about Jesus’ love.

The more we loved them, the more lovable they became.

Our kids began inviting them in to play and we tried to include them in as much as possible. Little by little, our love for them grew. We found the foods they like and made sure to prepare a little extra. We shared any extra clothes that we had and cut their hair when they needed a trim.

As our love grew, our sorrow grew as well. Why were these precious little kids not in school? In talking with their parents, we discovered the reason why these boys had never attended school – their mom was unwilling to get up and take them. Easy enough, I could take them!

When I went to school with the mom to register her kids, I discovered something amazing: she didn’t know how old her kids were and she was incapable of figuring it out. That is why she always told us different ages. The kids’ identification cards indicated their dates of birth, but she didn’t know how to subtract the birth year from 2017. I realized that without seasons (it’s always hot here), religious holidays (they are not practicing Christians), school years, or the money to celebrate such events as birthdays, there is nothing to punctuate life. One week just runs into the next and after blinking a couple times your kids have grown out of their clothes. When the director asked her to review the bulleted points of the school policy, she confessed to being illiterate. Although she stated that her kids should be in school, her declaration was unconvincing.

We went together to purchase the kids’ uniforms and required school supplies. Jose and Fernando were ecstatic! The next day they arrived at our house extra early and couldn’t wait for their first day!

When we arrived in their respective classes, reality set in and both boys clung to me and cried, “I’m scared.” Fernando adjusted a bit quicker and was willing to join his classmates. However, Jose remained in my arms for quite a while and whimpered, “Don’t leave!” I stayed, as I would have with my own kids, to rub his back and hold his hand until he felt comfortable with his teacher and peers. It was an emotional day.

The following day Jose and his little brother arrived at our home ready to go, as they did each day…until the novelty of school wore off.

If the boys don’t arrive at our home by 7AM, I go looking for them. Often times, when I arrive at their home, everyone is still sleeping: Mom, Jose and Fernando, as well as their four sisters (one of whom is pregnant). When I call for the boys through the paper-thin walls, their mom often awakes and starts yelling at them to get up. It breaks my heart to hear her hitting them and screaming about their inability to keep their belongings in order, as if the mess is their fault.

Sometimes I wait outside, but other times I go in to help dig through piles to find their shoes and backpacks. Usually they wear the same clothes they wore the day prior (and to bed) because their uniforms are either dirty, wet or lost amidst the mess.

Before we leave I’m always torn by the fact that they need to brush their teeth. As their pseudo-mom, I want to teach the importance of good dental hygiene. However, knowing that they brush their teeth in the same gutter where trash floats upon human waste, I usually opt for bad breath.

Most of the time, after getting all ready, Jose eagerly jumps upon my back and enjoys a bumpity horse ride all the way to the school gates, complete with neighs and snorts.

However, other days Jose’s mood takes a terrible turn after having a confrontational conversation with his mom. He cries and throws his backpack. He stomps around and yells. This somewhat frequent occurrence has been mystifying to me because I haven’t been able to decipher their arguments. Just recently I was finally able to understand…

Breakfast is served in school to all those kids who can pay one sole. On the days when Jose’s mom doesn’t have a sole to give him, he’d rather not go because he won’t get to eat with his classmates. Instead, he’ll be made to wait in the doorway while the others enjoy a hot, porridge-like mixture. Not only is this hard because he knows that there will be nothing to eliminate his hunger pains, but he also knows that those who are eating will tease him and the other “poor” kids, which is so humiliating.

This morning, after Jose and his mom finished screaming at each other, I scraped his limp little body off the ground and offered him a piece of the bread that we had in our house. He reluctantly agreed and hugged me tight around the neck. As we were rounding the corner toward our house, I whispered in his ear, “Jose, I think I might have an extra sole in my bag that you can take to school, if you want.” He perked up, nodded his head up and down, and wiped away his big crocodile tears.

I gave him the promised piece of bread as well as the coin that represented so much. When we reached the schoolyard I kissed him on the top of the head and said, “Have a nice day.” Although he said nothing, he said everything with the twinkle in his eyes.

Katelyn has been helping Jose learn his letters, numbers, colors and shapes. When he arrived at school the first day he didn’t know any of his colors, could only count to three, and couldn’t even write his name. Although progress has been slow, his teacher has told me that he’s doing alright. “Little by little,” she always says with a smile.

The little boy that used to steal toys and food has stolen something so much bigger….my heart. I love him and want the world for him.

Jose comes with us to church all the time. He’s learning to cross himself and genuflect upon entering and exiting our sacred place of worship. He always sits right next to me and eagerly kneels, stands, and sits at all the right times. A couple weeks ago, he even volunteered to lead a Hail Mary during our rosary. Jose and I pray together on the way to school and after he’s had a tough interaction with the neighborhood kids. He loves looking at all the pictures of Jesus in our house and asks questions all the time. It’s amazing!

Jose is eager to begin preparation for his First Holy Communion (as well as Baptism and Confirmation) which he’ll receive in November 2018.

Often times, in the evenings, Jose shows up at church hungry. Thanks to the incredible generosity of our team members, we’re always able to take him to the food stands to get some chicken and rice. This night he was especially happy to be eating. Not wanting his food to disappear too quickly, he nibbled away for almost an hour.

Martin Luther King Jr. was spot on when he said, “Love is the only force capable of transforming an enemy into a friend.” Although we never called Jose and Fernando our “enemies,” we felt it in our hearts. I would be ashamed to share all the rotten thoughts I had about them when they were chucking rocks against our door as we were trying to read science and history with our kids.

Back in March of 2016, when I was laying awake at night worrying about my kids’ education, I never could have imagined that the answer was so simple: LOVE.

By loving Jose and Fernando, our problem has almost gone away. Now, all the neighborhood kids are in class during the day which gives us the quiet we need to do school work together as a family. We have the peace we were seeking, not because we pushed people away but because we drew them in close. 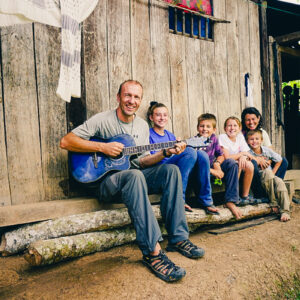