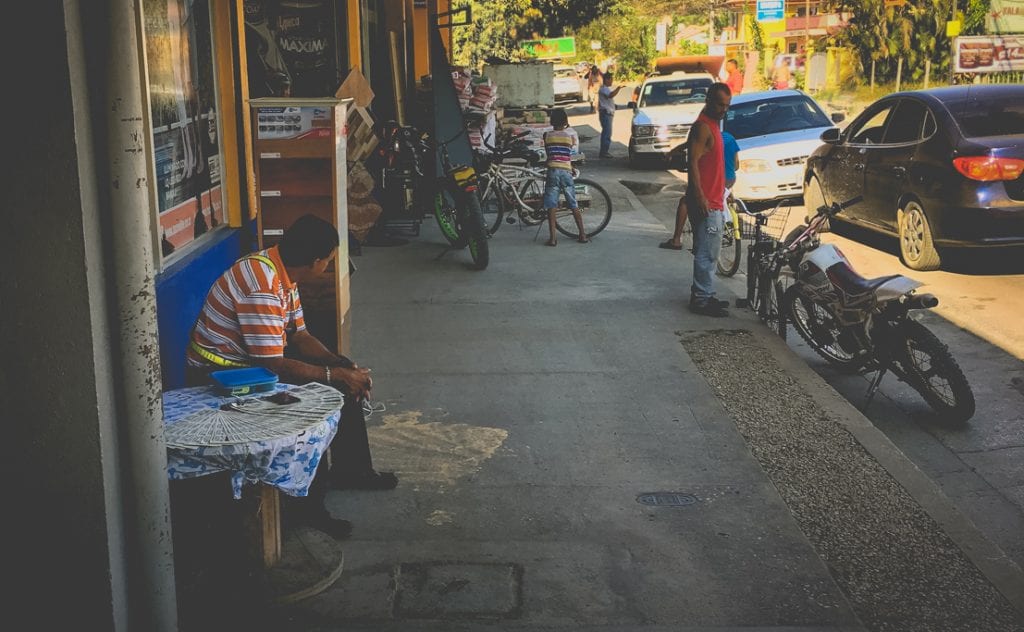 I can clearly recall my first and second encounter with Manuel. First was him begging me for change outside of an ATM with his surroundings littered with trash, empty alcohol bottles, and spare small coins. It was dusk and it appeared as though he had been there for quite some time. He was barely awake but had enough energy and sobriety to take off his croc and show me his two deformed feet, as if to say, “Look at me! I deserve some help here!”

The second time was him begging me for change outside of a store clear across town. At the first encounter I declined him, while the next I sat with him a few moments and spoke choppy Spanish with him.

“All I have on me, Manuel, is this change but can I pray with you? Can I pray that Jesus would be truly present with you today?” A sheepish and shameful half grin and a “Yes, my friend” was all I got.

My next encounter was on a Thursday evening with my entire family. We were leaving church and had planned to grab something to eat as a family. There he was – this time with a friend named Pedro – sitting at his post outside of the ATM booth, a fairly genius post for a beggar to sit, in my opinion. This time he recognized me as a person… and I recognized him as a person.

“Felipe, my friend!” he called out.
“Hola Manuel! Como estas?!” That was about the extent of my Spanish.

He acknowledged my beautiful wife and children and asked if they were all mine.

In extremely choppy Spanish I said, “Look, we are headed to grab some dinner and would love for you and your friend to join us. Will you join us?” His face lit up even more, almost like a child finding out his dad had skipped work for the day and was taking him camping or something.

That night we prayed as a family at the dinner table – Manuel and his buddy Pedro there with us as well. Pedro also struggles with alcoholism. I invited them to order what they wanted and to enjoy a meal with us. They ordered beer (and food) because that’s what they are used to doing. We attempted to converse in Spanish and essentially got nowhere so we ended up simply looking and smiling at one another over a meal for the most part.

Quite awkward at times, but as they went their own way and my family went our way I asked my children what they thought the requirements were for us to go to heaven one day.

“We know, Dad…The golden rule…Love God with all your heart, mind, soul, and strength and love your neighbor as yourself… You and mom have already taught us that.”
“Bingo. But listen to this.” Then I paraphrased the passage below.

I have often encountered Jesus in folks like Manuel. Folks I often assume I don’t have time or energy for. I often move in another direction to safeguard my time and my energy and I am ashamed to type that. I often view the poor, the addicted, the overwhelmed, and the beggar as someone who is not on an equal ground as me. How far from reality I am.

Were Jesus’ words above sincere? Did he mean what he so firmly stated? Perhaps the poor, addicted, overwhelmed beggar in this scene is actually me? Thankfully my shortcomings and addictions have yet to place me outside of an ATM begging for money. Thankfully I have family and friends who would probably rescue me instead of selfishly walking by if I ever found myself there. Thankfully I was born with two working feet. And thankfully on and on and on…

I pray that Manuel will be freed of his addictions one day. I pray a prayer of thanksgiving for his brokenness and willingness to beg out of desperation as it indeed brought us closer to JESUS.

Social
« Is Just One Soul Worth It?
The Gospel of Matthew, according to Alex »