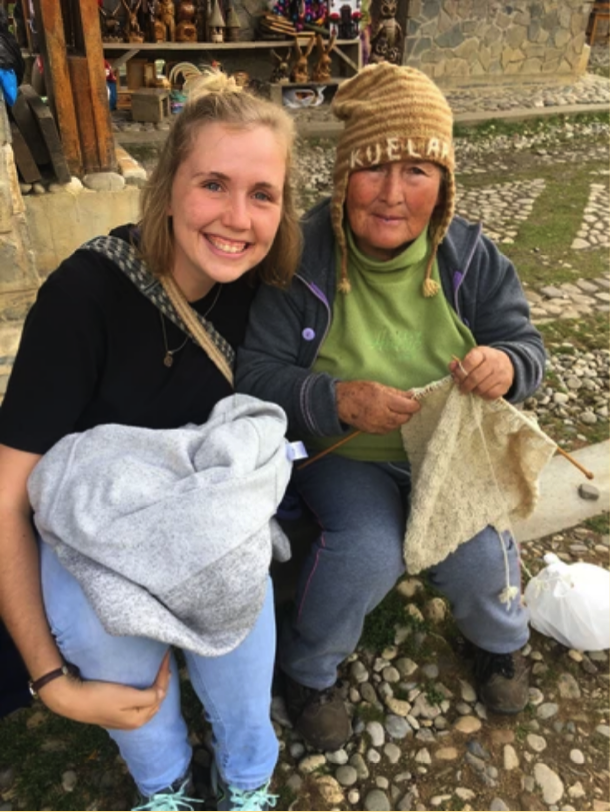 My teammates and I spent a couple of days on retreat last week in a beautiful mountain town in Northern Peru called Chachapoyas. One morning as I was walking back to our hostel from the Church, I was thinking about lots of things at one time, especially the reading of the day for Mass that had been about perseverance in loving others. I sipped from my cup of hot tea I had bought from the market down the road, and in my mind I was brainstorming ways I could better love my team and the people I serve in our town.

I was lost in thought and because I wasn’t paying attention to where I was walking, I almost tripped over something bright purple by my feet. I was startled and immediately I looked down to realize it was a person that I had almost tripped over. Right there was a woman wearing a bright purple jacket who had no legs and was literally crawling on the sidewalk to get to the market. She was by herself and somehow managing to carry a cup with some small change in it that she had most likely begged for on the corner she was coming from. It was obvious that the crawling was taking a lot out of her and she was panting. I had never seen anyone crawling in such a way before, and I was so startled that I took a couple of seconds to watch her. I took a look around me assuming that others would be just as shocked as I was, but as I looked around I realized that nobody was even looking at her. Everyone walking by us was either looking at their cell phones or looking off into the distance without so much as glancing down at the woman crawling down the middle of the sidewalk.

Another second later, a man in a suit on his cell phone almost tripped over her as well. He didn’t look down longer than the time it took him to catch his balance. He didn’t stop to look her in the eye or to ask her if she needed help. He just kept walking like everybody else. When I turned my gaze back to the woman to greet her, she had already gone into a door to use the restroom. I never saw her again.

How did she get to this place on the sidewalk? Did she crawl from where she lives in town, or was she dropped off by a family member or friend to beg all day? Did she have enough money for food for that day? What is her name? What’s her story?

I didn’t have the opportunity to encounter that woman in her affliction or try to help her because I wasn’t paying attention. I was too consumed in my own thoughts that I didn’t see a human being crawling in pain right in front of me. What a tragedy it is that in a big city a person with serious needs can come to beg for help, literally crawl down the middle of the street, and somehow remain invisible!

I stopped for a minute to say a little prayer for her in my head, and I realized how ironic it was that I had been praying about how to love others when by accident I almost stepped on a person in real need. It wasn’t because I didn’t want to help her, it was because I wasn’t paying attention. I knew in an instant that this was the Lord’s answer to my prayer: “You want to love others? Well, pay attention!”

How many others had I not paid attention to that day? If I was a couple of feet to the left, would I have even noticed her at all? What a tragedy that would have been! I made a resolution in that moment that I would pay more attention to the people around me.

Later that day, my team and I went on a hike to see some ancient ruins. At the end of the hike, my two teammates went into a small museum, but I decided to stay outside and look at the beautiful mountains. I remembered my resolution to pay attention to the people around me, and my gaze turned to a woman sitting all by herself knitting. I walked over to her and sparked up a conversation. She got out a blanket for me to sit on, and I asked her about herself. Her name is Dignalatore, and she is the owner of one of the tourist markets just outside of the museum. She has 8 children, all of whom have moved away and do not keep in contact with her. She lives by herself, as her husband moved away a while ago as well. She makes money by sitting all day outside, knitting things to sell to tourists.

The top of the mountain where Dignalatore works is often freezing cold, but she has been doing this for years and told me that after a while you forget how numb your hands are when they hurt as you knit. We talked for awhile about life and about God. I introduced her to my teammates, and she immediately offered them a blanket so they could sit on the cold ground with us. She was so lonely and yet so hospitable. She has a story worth hearing and I am glad I paid attention to her.

The next morning, I was again walking back from the Church to our hostel. I had hoped I would be able to meet the woman in the bright purple jacket, but she wasn’t on her corner that morning. I again remembered my resolution to pay attention, and about a block later, I saw another person with no legs crawling to a spot on the corner. I knew at once this was a merciful opportunity from the Lord, a second chance for me. I walked over and started talking with him. His name is Segundo. He told me all about his life and how he had come to be so lonely. He moves from town to town begging for money, as his mother is very old and cannot support him anymore without working. His brother does not help him either, and so he travels around hoping to make some money from tourists. He crawls to his corner on the pedestrian street every day from a room he rents a couple of blocks away.

He was such a friendly man and we quickly became friends. I was able to visit him every morning, give him a little bit of money for a room, and get to know him a little more. One morning we went to the market together, I walking and he crawling. He asked me why I kept stopping to sit and talk to him. I answered him with the truth “Because we are friends, because you are important, and because God loves you very much.” He has a story worth hearing and I am glad I paid attention to him.

The last day of our trip, I went to say goodbye to him and to introduce him to one of my teammates. Rachel and I sat down to chat with him for a little bit, and a man came by and congratulated us for talking to Segundo, saying that God is watching us and will be happy to see we are talking to a disabled man. I get it: he was happy to see the youth stopping to talk to someone in need. But talking to Segundo was not merely an outward act of Christian bravery or heroism that only foreign missionaries can do. This is common courtesy. This is acknowledging and encountering other human beings because they matter and because God loves them. This is how we love others, by paying attention. And this is a call for everyone.

Christ loves us deeply and always pays attention to us. He hears us, and he sees us. His gaze changes and heals our hearts and lives. We are called to be like Christ. When we know Him and follow His example, our gaze can heal and change hearts too. But only if we pay attention.

“The way we came to know love was that he laid down his life for us; so we ought to lay down our lives for our brothers. If someone who has worldly means sees a brother in need and refuses him compassion, how can the love of God remain in him? Children, let us love not in word or speech but in deed and truth.“
– 1 John 3:16-18 –

Encountering new people in a tourist town is so beautiful. But so is investing in the people we work with, live with, serve with. Are you really paying attention to the people in front of you every day? If not, how can you start today?

“The Lord has loved me so much: we must love everyone…we must be compassionate!“
– Saint Josephine Bakhita – 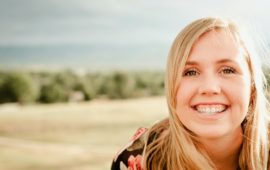