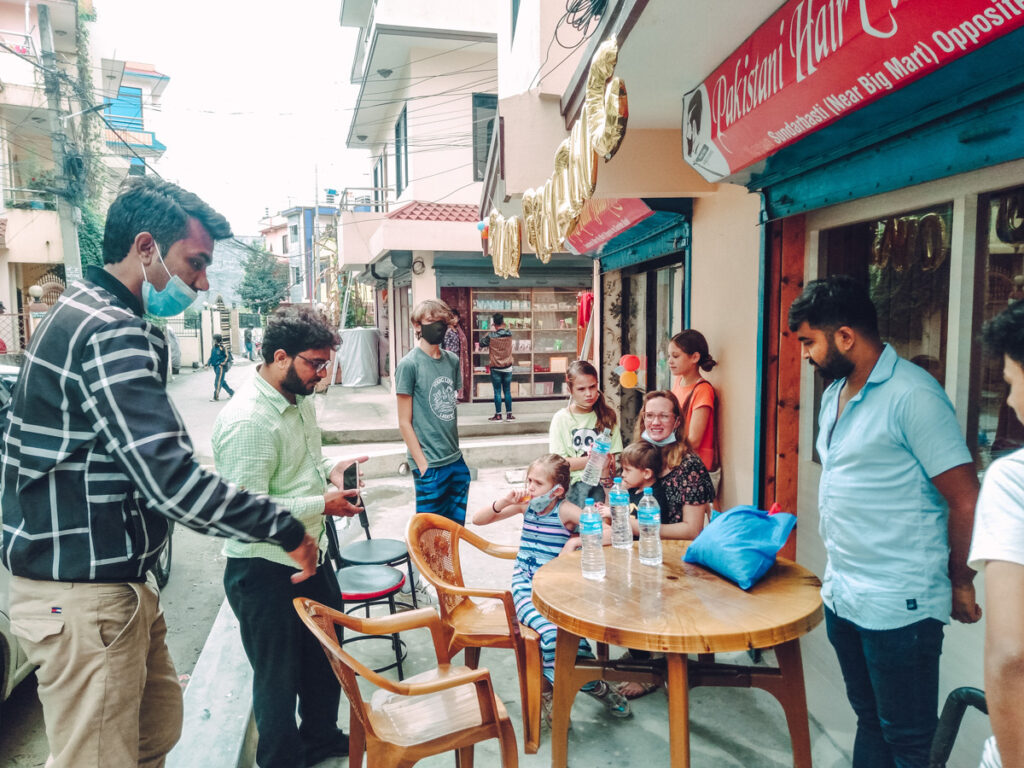 Before we entered into world missions, I was blessed to sell commercial real estate for nearly a decade. I can remember my first big transaction: selling the former Circuit City building with my mentor Hammy Davis. Hammy was larger than life, wildly successful, yet perhaps the most generous giver I have ever met. For months we had no offers on the building, and then pure exhilaration ensued. Out of the blue, we had multiple offers all in one day, and they even got into a bidding war. I got to see my mentor Hammy, who is now deceased, work his magic. When we called the corporate office we informed them their building was selling way above the asking price.

Many years and transactions distanced from that, I now find myself living here in Nepal, with my real estate career long behind me—or so I thought.

Francis and Riana have fled horrendous, bloody persecution in their home country of Pakistan.

We met Francis and Riana after Mass one day here in Nepal. They, along with their four children, have fled horrendous, bloody, and unmentionable Muslim persecution in their home country of Pakistan. They achieved asylum refugee status and are now trying to rebuild their life. Still, life is extremely challenging for them here in Nepal. The average minimum-wage worker makes roughly 500-800 Nepali Rupees per day, which is roughly $4-$6.50 per day or 50-90 cents per hour. But for them it’s especially challenging to find meaningful labor. Our family assists them each week with groceries and essential items, but they need so much more.

Before they fled Pakistan, they were both owners and operators of their own hair and beauty salon. They both cut hair and Riana did ladies’ cosmetics. They were skilled at what they did, and they loved it. In an instant, they had to leave it all behind to preserve the safety of their family. Now they are here scrambling, trying to find work.

Between the Covid-19 lockdowns, which have essentially shut down all salons, and the few available jobs, it’s nearly impossible for them to find an honest day’s work. They dream of moving somewhere like America or Canada where they can try to pursue their dreams, but that is most likely not a reality for them.

Pope John Paul II declares, “Work is a good thing for a man, a good thing for his humanity, because through work man not only transforms nature, adapting it to his own needs, but he also achieves fulfillment as a human being and indeed, in a sense, becomes more of a human being.” (Laborem Exercens 9).

Lacy and I had a wild idea one day. After prayer and discernment, we thought we would offer to help them start their own hair salon. When we mentioned this, their hearts and eyes came alive. It was like looking into the eyes of children, still filled with dreams, hopes, and expectations. It was a thing of beauty. They began to imagine their lives once again as normal human beings, pursuing their dreams as children of God, being able to provide for their family.

But quickly their childlike expectations were drowned out by their fear as they exclaimed, “Oh no, brother, we could never afford to start a new salon. We have no money.”

“Neither do we, my friend,” I quickly responded. “But Our Heavenly Father owns all of the money in the world, so let’s trust in Him.”

“Our Heavenly Father owns all of the money in the world, so let’s trust in Him.”

We found them a beautiful place in a safe area here in Kathmandu. I put my real estate hat back on, noticing the high traffic counts and imagining the large patio space could become a little sitting area for coffee and tea. I negotiated rent for them, and we talked to carpenters about building out the space. I laughed inside as I felt like I was back in the real estate business for a minute. My man Hammy would be so proud.

When I was mentored by Hammy Davis, he always told me to give things away for free: market knowledge and personal contacts. I didn’t quite understand him at first, because at times his giving was so liberal and unmeasured. I saw him give away more commissions to nonprofits in my first year of real estate than the average real estate agent would earn in an entire year. It was truly amazing and inspiring. “Just give it away!” he would always say.

I teared up a bit thinking about how much Hammy would have loved to work with Francis and Riana.

Francis and Riana celebrated an enormous grand opening for their brand-new salon. Fresh paint, new barber chairs, shiny new mirrors lit up the place almost as much as their enormous smiles. OUR GOD IS FAITHFUL! And He longs to see His children provided for, especially in their times of deepest despair. Every penny was provided for. With just a few emails our loving and generous donors supplied the funding needed for the project. How GREAT IS OUR GOD!

“My God will fully supply whatever you need, in accord with his glorious riches in Christ Jesus.”
-Phil 4:19

Social
« Jesus in the Rainforest
Who Am I »