The Night Jesus Came to Us

The Night Jesus Came to Us

A few weeks ago, Gabriel, my 10-year-old, was in a pretty bad bicycle accident.

It was around 6pm, and all the children in our pueblo were playing outside now that our region’s quarantine has been lifted. Gabriel had asked if he could go play with them before our scheduled 7pm adoration in the Church.  Reluctantly, I said “yes,” but had told him he would need to hurry back soon to take a shower before adoration. He assured me that he would be back in time.

No more than 10 minutes passed, and I heard a child screaming for me at the door, “Señora, Señora!” It was a call no mother wants to hear. By his voice I could tell something terrible had happened. I immediately begin to call upon the Lord. As I ran down our long hallway to the door, which runs the entire length of the Church, I knew Jesus could hear me.

The child begins to tell me that “la cabeza de Gabriel está rota.” (In English, Gabriel’s head is broken). I can assure you those are words no mother wants to hear in any language. The boy and I ran as fast as we could to where he was. The entire time felt like we were in slow motion. I could not get there fast enough. I again called out to Jesus asking him for his presence and to guide us and to heal my son.

Upon my arrival to Gabriel, I saw that his little friends had gotten him up.  All I could see was the back of his hand, which was holding his head. Both were covered with an extreme amount of blood which ran down the back of his shirt soaking it to a dark red. I immediately thanked Jesus for sparing my son’s life.

When Gabriel saw me, he immediately started to say “sorry.” I asked why he was sorry, and he said, “because now we cannot go visit Jesus.” The entire walk back to our home he just keeps repeating “I am sorry.” I assured him that Jesus would understand and reminded him that we could call upon Jesus right now to be with us.

After a quick evaluation of the injury, I knew I had to find a doctor. So, we drove to the larger town nearby, in hopes to find a clinic that still had a doctor available. As we drove, we prayed that Jesus would guide us.

As I was driving, I remembered a clinic that we always passed by on the way to the priest’s home. Upon our arrival we were excited to see that it was still open. While we were waiting, Gabriel was still saying that he was sorry for getting hurt and sorry that we could not go to adoration as planned. I reminded him we can spend time with Jesus any day and any time because we live right next door to him.

To keep his mind off things, I asked him if he wanted to pray a rosary, and he agreed. So, in the middle of the clinic’s waiting area, we begin to pray the rosary for the following intentions: for Jesus to guide the doctor, for all those sick and hurt at the clinic, for Gabriel’s friends that courageously came to his assistance, and for Jesus to come to our aid.

Not long after we finished praying the rosary, and after a few bewildered looks from others waiting to see the doctor, they took us to a small back room. As the doctor removed the bloody towel from Gabriel’s head, he looked at me and said this extremely big and deep injury would need about 50 stitches, possibly more.

My heart began to race. I had no idea what this doctor was capable of, or if he would use clean tools and pain medicine. Medical care in a third world country is not quite the same as in the US, though it is a great deal cheaper. It is not nearly advanced or as sterile. Doctors using gloves or pain medication are often things that one does not see here in Peru.

I could not help but ask the questions that were in my mind. “What about pain or numbing medicine.” He assured me that he would give Gabriel a shot for the pain and a shot of antibiotic before he began. I asked him, “Will you use clean tools and gloves?” At that point he pulled up a white plastic chair, and asked me to take a seat and to trust him.

While he was preparing the room, I asked the doctor his name. He answered by saying “my name is Jesus, the one who heals.”

I kid you not, those were his exact words. The time we were in the treatment room seemed to go by fast, even though we were in there about 45 minutes. Not many words were exchanged between the Doctor Jesus, Gabriel and I. The few words I said to Gabriel were “pray and speak to Lord, because he is here with us guiding the hands of the doctor.”

After the doctor finished sewing Gabriel’s wound, he asked us to go sit in the waiting area so we could pay. I was so worried about the cost. I had no clue what it would be or if we could afford the work the doctor did. With a bit of humor, I thought to myself maybe we can pay him with chickens. The only problem was we had no chickens to give him. I asked Jesus to make a way to help us pay the bill, to somehow make it something we could afford.

As I was praying, I looked up. To my surprise Father Robert, the priest we work under, was standing in front of me. He had a concerned look on his face and immediately asked what happened and if we were ok. He was joking with Gabriel that he should watch out for those bikes that like to throw off ornery boys.  Gabriel grinned as much as he could, considering the pain he was in.

I asked Father why he had come to the clinic. He just smiled and said he came to see his nephew who is Gabriel’s age, who also is here because of a bicycle injury. Before he excused himself, he blessed Gabriel and said to him, “get well, my little altar server.”

By this time, they were ready for us to pay. The nurse, with a concerned look on her face, told us that because the wound was so big, and it took over 50 stitches, the doctor is charging 150 soles. I thought to myself, “Only $50.00? Ok, we can swing this!” Jesus heard my prayer—that was the exact amount of money I had in my wallet. What a blessing that was, because I wasn’t sure if I could come up with chickens for the payment!

Upon our return back home, Gabriel said once again, “I am so sorry that we didn’t go to adoration.” I immediately told him, “Son, I think Jesus came to us tonight.”

Indeed it was Jesus that was present among us that night, alive in the doctor of few words, but who had soft and precise hands. And Jesus came in the form of a holy priest and friend to comfort and joke with Gabriel. 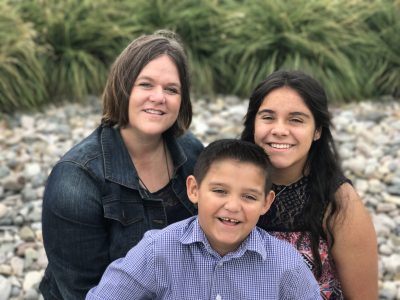 Social
« He Will Wipe Away Every Tear
Breaking the Mold: A Birth Story »