Five Years of Our Calling 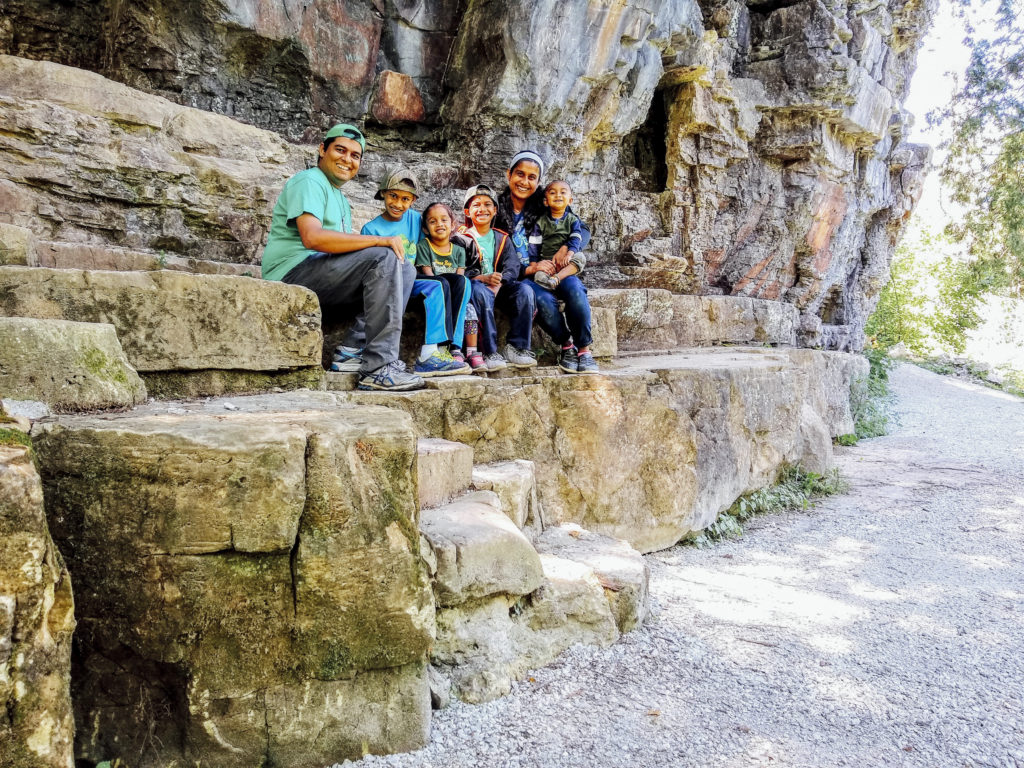 Five Years of Our Calling

The story of our calling began in an idyllic setting in the scenic hills of [an Asian nation] five years ago in the spring of 2014. On a family vacation, we were told of a retreat to be held a month later at that exact same spot. Noticing our two children, the couple that told us said it would be exciting––there were some Americans involved and these folks were missionaries and often went on mission with kids in tow. We wondered how we could attend the talks with our two boys and they assured us there was kids ministry during the main sessions. They even said that one of the guys coming had been miraculously saved as a child while falling down a cliff and that his guardian angel appeared to him and told him he would be okay.

Wow! Both our hearts were tugging at us to go! While we were both baptized and confirmed Catholic, we had practically fallen away. As a matter of fact, we had gotten our kids baptized and all, but it was more of a cultural thing, to maintain our ‘Catholic’ identity in a multicultural and diverse city in a very populous nation. Having grown up deeply involved in church life, we both wanted to get back.

A month later, we somehow made it to the retreat––God had to have sent angels to get us there. We say somehow, because the day before we could get to our destination, there was an extreme storm; intense lightning accompanied by heavy rain, power had been disrupted and trees had been uprooted and strewn all over the place. Two of us adults had been up: the whole night. Other family members that were with us strongly tried to dissuade us from going on the retreat. They said that we could always go on another one some other time. HE had other plans though!

We got back to our vacation spot of a month earlier. Family Missions Company was organizing this retreat. It was called: “Into the Deep” and boy, did we get taken deep! Our first session on the Great Commission blew us away. And then it just got better and better! Why did we never hear all of this stuff growing up and going to primarily Catholic institutions our whole lives?

Before we left at the end of the retreat, we were prayed over for an infilling of the Holy Spirit and were given a copy of Pope Francis’ encyclical: The Joy of the Gospel. We went home, dug out our Bibles, and began to read the scriptures. We had been away from confession for several years and we went back. We started regularly going for Sunday Mass. Through our scripture readings and the readings at Mass, He began to woo us––and again, through His grace, both of us were on the same wavelength. Life changed, dramatically and fast! The adventure of following Jesus in a radical way had begun…

The following year in August of 2015 our family was boarding Lufthansa flights to get to Houston. God helped us surmount quite a few obstacles! We got to Big Woods in Louisiana. Having read Mrs. Genie Summers’s book Go! You are Sent around a year earlier, it was a surreal feeling and yet, it seemed in a rather strange way as though we were home! A couple of weeks later, we began our training as missionaries. We had a cool surprise in store: we got pregnant with our third! In January of 2016, after completing roughly three months of intense missionary bootcamp, we were sent to the Philippines to our first mission post in the city of Malaybalay. Our mission there was a short two months and, on returning during a family retreat, we strongly felt the Lord ask us to remain in the US. In May 2016, our third child was born in Louisiana.

Subsequently, during our prayer time, the Lord would ask us to seek more of His Holy Spirit and to learn about the variety of gifts and charisms. We also felt called to focus on the entire Great Commission, especially healing and deliverance as described in Mark 16:15-18. Jesus said to them, “Go into the whole world and proclaim the Gospel to every creature. Whoever believes and is baptized will be saved; whoever does not believe will be condemned. These signs will accompany those who believe: in my name they will drive out demons, they will speak new languages. They will pick up serpents [with their hands], and if they drink any deadly thing, it will not harm them. They will lay hands on the sick, and they will recover.”

As we began to research and learn more about this, the Lord led us to go to the 50th anniversary of the Catholic Charismatic Renewal in Rome with a brief stopover in Lisbon, Portugal (from where we were able to visit Fatima). This is another dramatic story of the Lord’s faithfulness as the plans for this unfolded and the funds miraculously came together. At this event, we were introduced to similar moves of God happening in the global Catholic church. We were blessed to hear several evangelists pursuing God’s call to proclaim the good news accompanied by a demonstration of the Gospel through healing and deliverances. One of these individuals is Damian Stayne, the founder of a British lay community, Cor et Lumen Christi.

On our return from Rome, we were able to watch Fearless––a Catholic documentary made about evangelization using the gifts of the Holy Spirit, that a missionary family from Michigan recommended us to watch. It was fabulous! God was continuing to affirm the call HE had placed on our lives with regard to the gifts of the Holy Spirit and evangelization! Barely a few months later, another missionary family visiting Louisiana asked us if we wanted to go with them to discern moving to the Diocese of Green Bay in Wisconsin. Since we had just come back from a celebration of the Holy Spirit’s work in the Catholic church, we didn’t want to say no without first checking it out, especially if this was something from God.

On our road trip to Wisconsin, probably an hour away from the state border, we got a text from the office confirming our papers to stay as missionaries had been approved for around a year. This was one of the first signs that God wanted us to move to the dairy state. A couple weeks later, we got invited to visit the Shrine of Our Lady of Good Help on the feast of the Assumption of Mary. During the feast Mass the Bishop of Green Bay, the Most Rev. David Ricken, gave a powerful homily. It impacted us significantly as he focused on evangelization as well as healing. Our family discerned coming back to Wisconsin.

We soon discovered that we were expecting our fourth. That December, we moved to Wisconsin, officially becoming cheeseheads! At our first meeting with our Bishop, we presented him a copy of Fearless as we were sure he would like it.

In January of 2018, we got invited to participate in Alpha. An evangelistic program, Alpha gradually introduces participants to a personal relationship with Jesus. We are enamored with the structure of this course as it has a weekend where the attendees receive prayer for an infilling of the Holy Spirit and one of the later sessions talks about praying for healing and that God heals today! In April of that year, we welcomed our fourth child.

The Alpha program has been our primary evangelistic tool and we have helped host them in conjunction with our parish. A few of these were done out of our mission house.

During the very first Alpha program we participated in at church, we had a recently married couple where the wife was diagnosed with severe endometriosis and they were told she had to have surgery and would only possibly conceive after four years. After the session on healing, our small group prayed in faith. Some weeks later, we heard that the woman had miraculously conceived. However, sadly, the couple lost this first baby and the doctors told them they wouldn’t conceive and they again miraculously conceived and this time, the miracle baby made it through the pregnancy and was born a few weeks back. This is one of many healings and miracles we have seen!

Some of our other ministries are working with the charismatic renewal in Green Bay, prayer ministry for physical healing at home, church and sometimes at people’s homes for those that are restricted in traveling, as well as occasional jail ministry. One of our major challenges in Wisconsin is the significantly long winter.

In the fall of 2018, Encounter Ministries, one of the groups featured in Fearless, was starting a school in Michigan focusing on activating and equipping the body of Christ to use the gifts of the Holy Spirit for evangelization. The school was over several hours away. Our religious worker status was expiring the second week of September. Gerry’s driver’s license would also expire with the status. However, prompted by the Holy Spirit that led to a leap of faith, the school application was filled and sent. The application was accepted. Now God had to come through for Gerry to start the school. In the last week of August the papers arrived in the mail, confirming our status was renewed and we were good for another two and a half years. Despite the weekly fourteen hour roundtrip, yes, you read that right, going to the Encounter ministry school has been such a blessing and we have been able to bring back so many of the things we’ve been learning.

This month our Bishop invited Encounter Ministries to teach, activate, and train diocesan and parish leaders at a one day training with a special emphasis on evangelization and healing.

GOD is so, so good! HE is taking us to newer and higher levels of faith! As we continue to follow HIM, we know the adventures he has us on will be amazing and exciting! To God be the glory!! This fall, we begin our fifth year as full-time missionaries. Onwards we go… Please pray for our family! Come Holy Spirit! 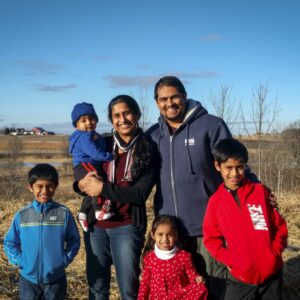 Social
« Good King Wenceslas
When the Poor Became My Family »