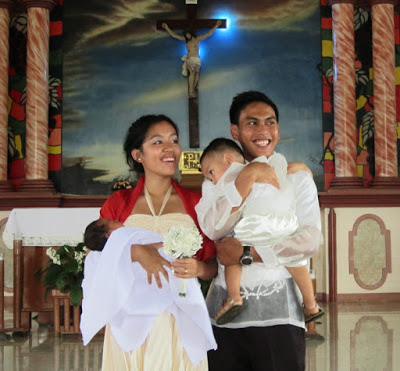 This is a story from my time in the Philippines in 2012.

The work of a Catholic missionary is not the same as a social worker. We want to help people in not just temporary ways, but in ways that will last for eternity. We want to introduce them to the One who will stay even when we are gone. But is this God we believe in just a fantasy, an illusion? How can anyone know He is real?

Like the early Christians we pray, “Lord, grant to thy servants to speak your word with all boldness, while YOU stretch out your hand to heal, and signs and wonders are performed through the name of your holy servant Jesus.” (Acts 4: 29). The burden of proof is on Him, not on us.

We tell people, “If you seek God’s kingdom first, He will give you everything else you need.” (Mt 6:33). And the next thing you know… He does!

This is the story of a young man named Ramon from the Philippines. Ramon was a 20-year-old who lived with his girlfriend Kring Kring, and their one-year-old son. They were expecting their second baby when they met a bunch of Catholic missionaries who invited them to join a bible study.

Ramon had never read a bible before. He had lived a wild youth: part of a dance group and local gangs, drinking too much, often involved in drug use and gang violence, and far from God. But with that bible study and the ones that followed every week, things began to change. In the course of the next six months, Ramon and Kring Kring decided to give God a chance. They experienced the overwhelming grace of God as they received the sacraments of Reconciliation and Matrimony (pic above).

Ramon and his family, like many in the Philippines, led a hand-to-mouth existence. With two young children, trying to complete his education, and an unreliable job killing and roasting pigs for fiestas, finances were even tighter than usual.

One day they had no rice, no diapers, and no milk for the babies. “I don’t know what we’re going to do,” a worried Kring Kring said to Ramon. But Ramon had heard of a new way of responding to trials. “Have you no faith?” he asked her.

Then He turned to God. “God, You PROMISED You would provide for us. You are the Provider! I challenge you to provide us with rice for my family! If you can do this, THEN I will really believe You are all that they say You are!” It was a fleece Ramon was putting before God, as in Judges 6:36-40. Perhaps not the ideal way to relate to God, yet God is patient with us, and meets us where we are.

The same day, Ramon received a call from a friend. “Ramon, do you want to participate in the Barangay Gwapo compeitition?” (A barangay is the smallest unit of local government in the Philippines, similar to a neighborhood. Gwapo means someone who is attractive or good-looking. So “Neighborhood Cutie”?) Apparently someone had dropped out suddenly from the competition, and they needed someone to fill in.

Ramon was astounded. “I don’t have any time to prepare. I don’t have any clothes to wear.” But he decided to do it. He borrowed clothes from Sammy, the only male missionary on our team. His talent was dancing, but he had no music to dance to. He came to S, another missionary, and she went through the music on her computer. The only music she could find that he could dance to was a song called “Used To Do It Too” by Christian rap artist Lecrae, the lyrics saying, “I used to do it, used to do it, used to do it too/ But I’m changed, now I’m something different.” Sounds staged, huh? God is the Master Playwright, after all.

He got up on stage, said a prayer, and gave it his best. Kring Kring said, “Before when Ramon used to dance, it was like he had a devil in him. Now when I saw him dance, he was totally different. He was smiling!” In the question round, Ramon told the judges that what set him apart from the other contestants was that he was a religious man and that he feared God. And yes… He WON! The judges commented on how humble he was, and said that that helped him to make their decision. His prize was 3,000 pesos – enough to buy plenty of rice, milk and diapers, and even share with his extended family.

God was the One who proved to Ramon that His Word is true, that He really is a Father who cares about our daily needs, and that He longs for us to trust Him and come to Him with childlike faith.

Ramon and his family are now full-time Catholic missionaries too, engaged in serving the poor and sharing with anyone and everyone about the real God who loves and cares for them.

Social
« Am I Saving My Life or Losing It?
Living Catechesis in Mission: For Catechetical Sunday 2017 »