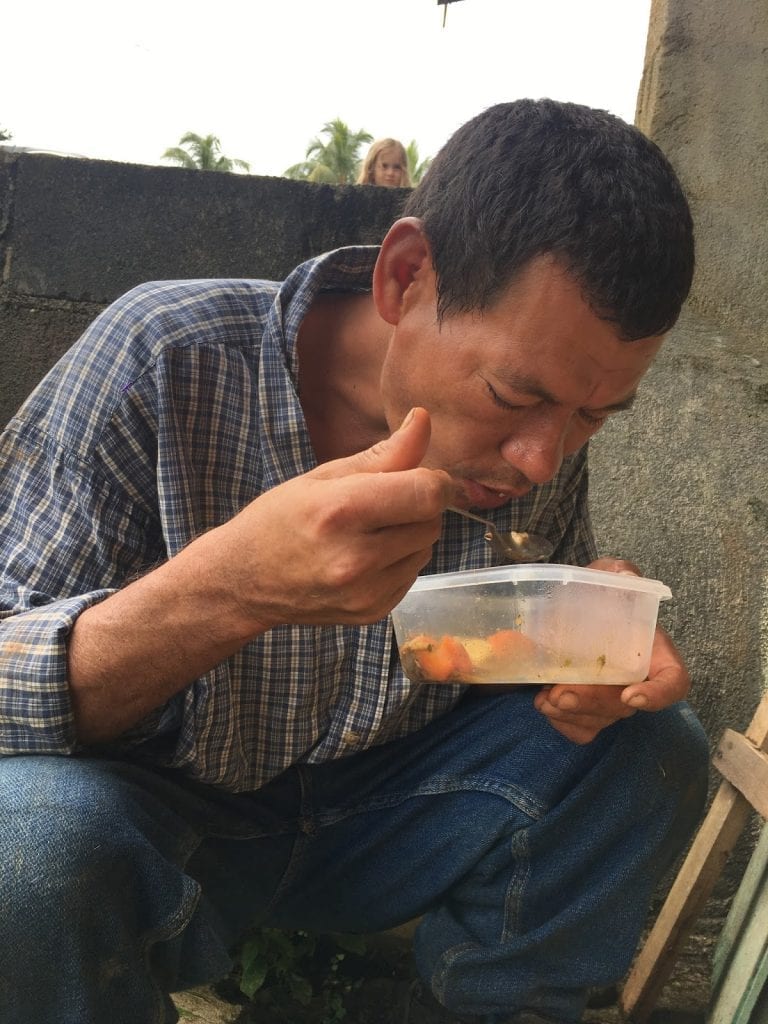 This past weekend, the Catholic Church celebrated World Mission Sunday. Praise God! Please join me in praying that our family’s simple and humble witness would be enough for the people we serve in rural, Central America. We have been blessed beyond measure by God and by the beautiful people of Costa Rica. Often times, our many shortcomings are on display as well and we pray that through our weaknesses we would be made strong and that we could have the grace and courage to boast in Christ and in Him alone. Below is a brief, honest, and broken reflection on the Church’s mission, the Great Commission.

Go
Over 2,000 years ago, Jesus Christ, the God that so many of us reading this article profess as Lord and King, proclaimed these words to his closest followers, “All power in heaven and on earth has been given to me. Go therefore and make disciples of all nations, baptizing them in the name of the Father, the Son, and of the Holy Spirit, teaching them to observe all that I have commanded you. And behold, I am with you always, until the end of time.” (Mt 28: 16-20).

The Church does not take these words of Jesus lightly; she has always boldly proclaimed that the mission of the Church is summed up in these final words of Jesus. Put simply, if we are not adhering to the Great Commission then we are not the Church. When we stop following this command of Jesus, we stop following Jesus and we are lifeless. Saint John Paul II states it best when he says, “For in the Church’s history, missionary drive has always been a sign of vitality, just as its lessening is a sign of a crisis of faith.” (Redemptoris Missio, 2). Therefore, if we don’t go, proclaim, baptize, make disciples, and teach then we are nothing more than self-seeking Christians. And what is a self-seeking Christian?

Eleven men made the UNBELIEVABLE achievement of spreading the Gospel of Jesus Christ across the then known world. I emphasize the word UNBELIEVABLE because that is what it is: an UNBELIEVABLE result. Perhaps taking a moment to focus on the end of these men’s lives will help us understand how such a rugged group of misfits carried out the master’s command so faithfully.

Life and Blood
“The blood of the martyrs is the seed of the Church.” – Tertullian

The only secret to evangelism that these eleven men held is found in Jesus’ criteria to become a disciple: “If anyone wishes to come after me, he must deny himself and take up his cross daily and follow me.” (Lk 9:23). And these words are no secret at all, yet often times they are deeply hidden in our proclamation of the Gospel. How often we spin our wheels as Christians trying to present the good news of Jesus Christ. Churches – Catholic, Protestant, Non-denominational, etc. – in America and most developed nations have budgets stacked upon budgets for ministries and programs and sub-programs to reach those in their cities. How are we doing? Are we creating true disciples? Are we creating men and women here in America who would drop their nets (I should mention that fishing was not mere recreation for these men, it was occupational) at the sound of the voice of God to come and follow the master into unknown lands? What type of Christians are we creating? Are we creating men and women who forsake worldly gain for the treasures found only upon the eternal shore, or are we creating Christians who long to make a permanent home here on earth? Make no doubt about it, the eleven men above had no desire to remain here permanently once their hearts had been so stirred by the example of their friend and teacher Jesus. And after the Holy Spirit invaded every single fiber of their being, these men were going to spread the love, truth, and power of their master Jesus Christ – even if it meant their death. And for them it did. Is it mere coincidence that each of these men suffered so greatly in delivering the command of Jesus Christ to the nations in such a short time? The gospel spread so quickly because of the radical witness of these eleven men and because of the radical witness of the Early Church. The apostles of Jesus Christ actually thought that the end of time was literally just around the corner, so they pursued their quest accordingly. For them, there was no tomorrow or no “next generation” to carry out the task. For them, there was no “Plan B.” They did not stop until they finished or died. And turns out, they did both. When you glance upon that list of eleven men, recall that they were humans just like you and me. Flesh and blood, one faith, one baptism.

So what about you and me? Where do we stand? Are we so consumed by Jesus that we could actually take the words of the Great Commission to heart as the apostles did, or even with a fraction of the passion the apostles did? Where does our passion and treasure lie? Is it in the alluring promises of riches and security that will abandon us at the moment of our death?

Jim Elliot and his four friends understood Jesus’ great command in the Great Commission as they abandoned all and boarded a plane to spread the gospel with the Huaorani people in Ecuador in 1956. It was the deep desire of Jesus burning within him that led Jim Elliot upon that plane. It was his zeal for a people with no hope, a people with no knowledge of Jesus Christ, his love, his mercy. As a spear traveled through his body separating it from his soul and ending his life, an unbeliever would have believed that his life was a waste. This man abandoned his wife and a new child to die alone in a jungle in Ecuador. What a fool. However, the fruit and truth was about to be full on the vine. Elliot’s lovely wife, Elisabeth then returned to the island to evangelize many members of the tribe and even the men who took her husband’s life. Because the mercy of God knows no bounds! There is absolutely no corner of the earth where God cannot find us and save us! Furthermore, hundreds, even thousands of missionaries have now claimed an honorable allegiance to Jim Elliot, claiming his witness and willingness to die for the gospel as a catalyst for their missionary vocations. The blood of the martyrs is indeed the seed of the Church. Blood has never failed and it will never fail.

What does it matter?

Some would say that the days of the Church’s call to evangelize the nations has come and gone. This statement could not be farther from the truth. Saint John Paul II reminds us of the importance of evangelizing the nations as he states, “I sense that the moment has come to commit all of the Church’s energies to a new evangelization and to the mission ad gentes.” (Redemptoris Missio, 3). To date there are people (millions, even billions), Christians and non-Christians alike who lack physical and spiritual resources, thus weakening their access and even desire to enter into a life giving relationship with Jesus Christ and His Church. You and I own many of those resources, physically and spiritually, but far too often we chose to keep them to ourselves. Most of our formation as Christians fails to challenge us to see our world like this. It fails to challenge us to see our brother in a foreign country as someone we should assist, as someone God is asking us to assist. For the price I spend on my latte at Starbucks, I could feed a brother or sister physically and spiritually for a very long time.

It matters because as of today there are over three billion human beings who do not know Jesus Christ. Think about that fact for a brief moment. Almost half of the world’s population does not know Jesus and we often fail to see that statistic as something that should drive the plans and prayers of our day. These people are referred to as “unreached” and they are broken down by many Christians by “people groups.” To date there are over 6,000 people groups who do not know Jesus. These people are unreached for a reason. Far too often a fear of their intolerant and oppressive governments keep many Christians far away from these people groups. They are very hard to reach, impossible. Well, impossible for us, but with God it is possible to reach these people with the loving and saving truth of the gospel of Jesus Christ. However, our programs and plans often fall short. What is needed is a faith of the apostles, a willingness to cancel our own plans and alter the direction of our lives. What is needed are saints. Saints who are willing to die to self and get on a plane and do any and everything to reach even just one of the “unreached.” Is there any higher or supreme calling in life than to bring another man or woman into the life of Jesus Christ?

Now is the Time

Today our Church celebrates World Mission Sunday. Today is a chance for us to realize that our Church is enormous, our Church is One, Holy, Catholic, and Apostolic. Our brothers and sisters are comprised of those 2.2 billion Christians across the globe. Wow! How can we better serve those within our Church who know Jesus? There are so many ways for us to help. Some of us find that God has called us to proclaim and make disciples at home, while God calls others abroad to serve. The truth is that we must all be involved in making disciples of the nations.

World Mission Sunday also calls our attention to the billions who still do not know the one who has set you and me free. For many of these people, the bondage of sin and the darkness of its consequences have yet to be fully realized. Please join me in prayer for these billions – the unreached, those who need you and me the most. Also, please join me in prayer for those thousands of missionaries who have selflessly “given up home, family, brother, and sister” in hopes to bring the gospel of Jesus Christ to these unreached. Many are victims of persecution and thousands per year are martyred for their faith. Finally, please join me in prayer asking the Lord of the harvest, Jesus, to send more laborers into the vineyard so that, as he states in Mark 13:10, “The gospel will be preached first to all the nations.”

Now is the time!